The Role of Strumming!

In this post, I’d like to look at what the FUNCTION of strumming a guitar is – as far as I understand it.

Have you ever heard of the word “comping”?

In the jazz world, it’s a short way of saying “accompanying”.  And in most of those cases, the jazz guitarist is accompanying a singer.

But jazzers make a really BIG DEAL about HOW YOU ACCOMPANY!  Let me explain.

The role of the “comping jazz guitarist” is to compliment what the singer is doing.  The guitarist is NOT simply “strumming” along in some pre-programmed pattern that really pays no attention to the singer.

Instead, with eyes and ears wide open, the way the jazz guitarist will comp (we’ll think of this as strumming with no insults intended toward the jazz community), is according to what he or she HEARS from the singer.

This approach in the jazz world is very similar to what I teach my students when they want to learn a song.  We listen to the song, establish some interesting rhythmic information in it and then explore APPLYING that information into what I call a “Strumming Solution”- much like the jazzers do.

However, in GUITARLANDIA (excluding the jazzers), there is a tendency to NOT TAKE THIS APPROACH.

Instead, strumming takes on more of a formula (or pattern) of “Play this strum pattern over this song“.  This approach has a PEEL & STICK  quality to it – Stick this pattern over that song!

In the long run, the peel & stick method does nothing to improve your overall musicality and certainly often misses the VIBE (I’ll talk about the VIBE in a moment).

Now if you think about it, what a comping guitarist is doing is pulling information from a singer (and the rest of a band if there is one) and making decisions about how to comp effectively with THAT singer.  In other words, the comping guitarist is responding to the VIBE of the singer and each singer will emote a different vibe.

Listen to a song with a view toward extracting rhythmically related information that will form the foundation of each song.  By doing so, you are responding to the unique VIBE of the song which, in turn, will allow a personally derived strumming solution rather than relying on a strum pattern “stuck in your nervous system” that uncle Tim showed you 5 years ago and you’ve been religiously using ever since.

For sure, there are songs where one strum pattern throughout the tune IS THE VIBE (Like Four Strong Winds).  But just as often, strumming is something much more organic and can change in structure throughout a tune from verse to chorus to bridge.  What causes the strumming to change?

What you HEAR throughout the song.

(surprisingly for some, this is doable even when there is no guitar playing).

In my next installment, I’ll be looking at some basic rhythm structures that can serve as templates for you to change around according to what is heard within a song.

Until then, feel free to leave me a comment below.

“You’re not practicing to get it right.  You’re practicing so you can’t get it wrong”

This site uses Akismet to reduce spam. Learn how your comment data is processed. 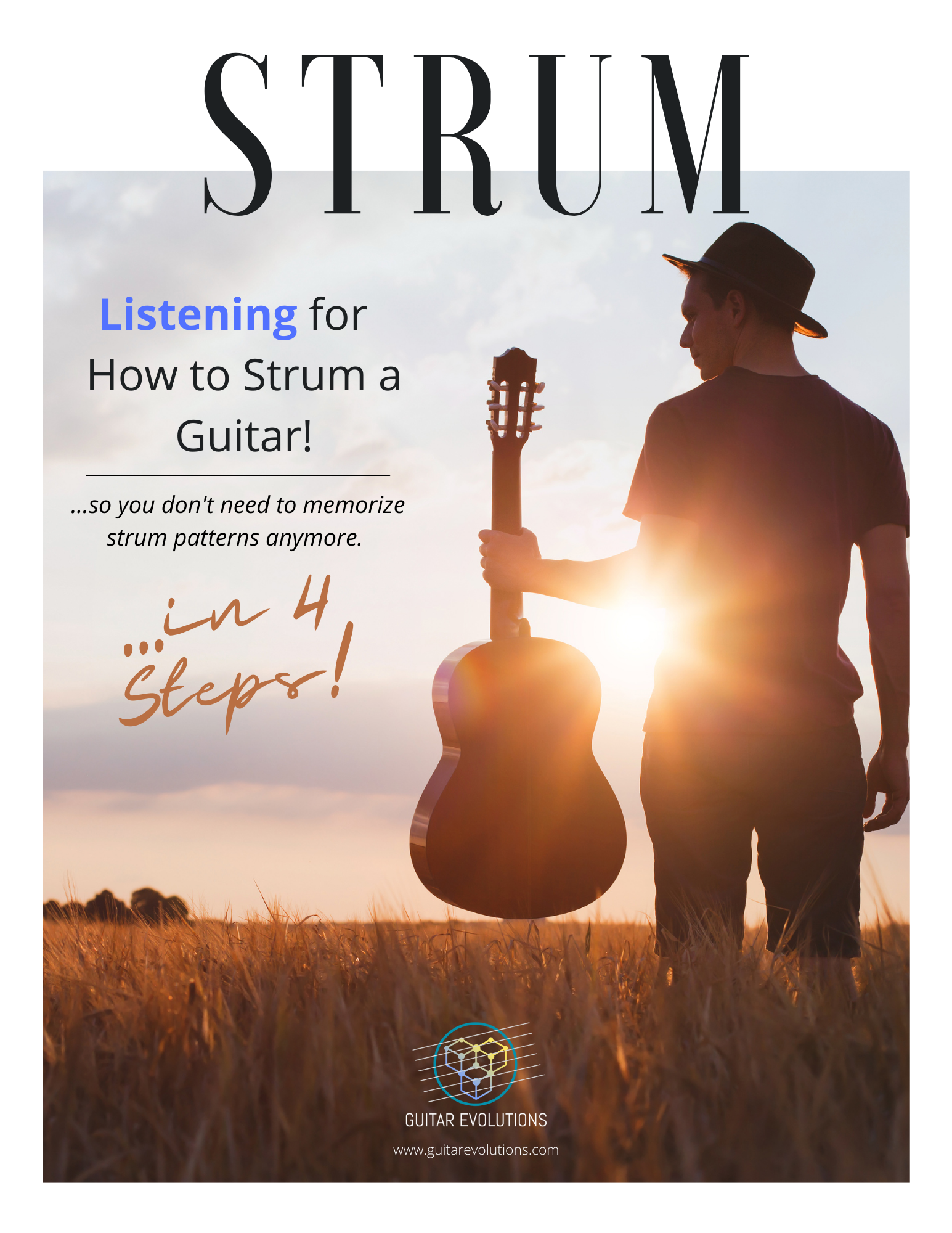 Listening For How To Strum A Guitar...in 4 steps.